The Poble Espanyol (Spanish village) could be said to be one of the first theme parks in the world, the Disneyland before Disneyworld, exceeding the North American attraction in city planning, historic and architectural rigour. In fact, Michael Eisner, the president of Walt Disney from 1984 to 2005 confirmed that the Poble Espanyol inspired the Disney theme parks.. 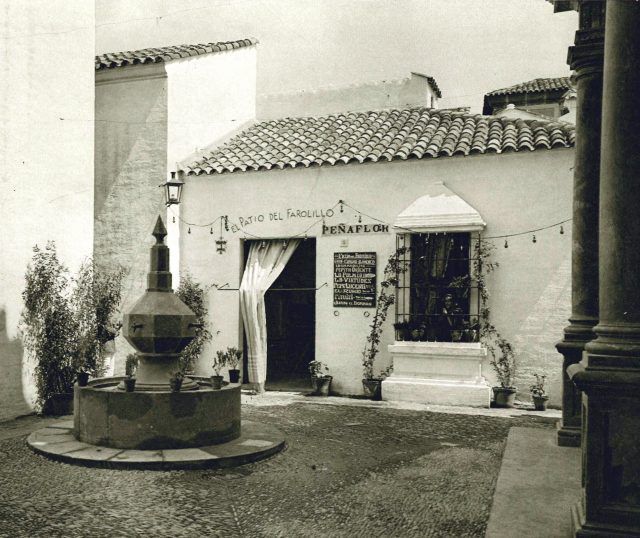 The Village of All Villages

Constructing a small and harmonious village of houses, streets, squares and patios from different areas of Spain, a country with an incredibly varied architectural heritage, is no small task. A great deal of professionalism and talent is required in order to seamlessly transition from an Andalusian street to an Aragonese square, or to have two towers from Ávila harmoniously give way to a main square from Castilla de la Mancha. But such was the objective: in a time when travel was difficult for most people, the Poble Espanyol enabled its visitors to sample all areas of Spain in as little as half an hour. Between 1927 and 1928, four catalans strove to make this ambitious idea a reality.

Two architects, a painter and the cultural agitator of the moment

Miguel Utrillo was the fascinating individual to lead the country’s cultural scene. A multi-faceted man (engineer, painter, poster artist, arts promoter, journalist), he became the soul of many cultural experiments of the time. Among other things, along with Rusiñol and Ramon Casas, he was at the epicentre of Catalan Modernism; he promoted Els Quatre Gats, the emblematic bar and intellectual hot spot; and, along with the architects Puig and Cadafalch, he conceptualised the Spanish Village. Utrillo had initially proposed this project to the mayor years before at the time of the previous World Fair of ’88.
Toward the end of 1927, Utrillo, along with the builders and architects Ramon Reventós and Francesc Folguera, and the painter Xavier Nogués, travelled across the entire peninsula. They drove a Hispano Suiza car, a coveted model in its time, and exhaustively documented their trip. These four professionals visited some 1,600 settlements during the months of September, October and November, and made notes, drawings and photographs of the buildings they found best suited for the future Poble Espanyol of Barcelona.

Like all constructions erected for a World Fair, the Poble Espanyol ought to have been demolished after the event. For this reason, it seemed rational to build it of lighter, more ephemeral materials, but the architect Noguera opposed this idea, on a whim of genius, and materials of higher quality were to be used instead. Due to the resounding success of the Poble Espanyol and the numerous compliments it received, its preservation was decided. Other similarly fortunate cases are the Tour Eiffel and the Atomium of Brussels.

Catalan artesans and the chords of an Andalusian guitara

When Santiago Rusiñol was interviewed for the Fair Brochure, he stated that

“the Poble Espanyol is simply fun and admirable. The country’s unity is evident in this quaint enclosure where all its architectural values meld together under the picturesque and cordial. Here, Catalans work in the street of Mercaders and the chords of Andalusian guitar fill the air.”

Alleyways and squares, white-washed walls peppered with flowerpots of geraniums, wells, fenced windows and balconies make up the Andalusian neighbourhood. True to their creator’s primary objective, these features create an atmosphere of Andalusian authenticity and character. They prioritised this goal over replicating grandiose and well-known monuments, which were evidently not hard to come by. This decision proved to be right on the mark, as it imbued the neighbourhood with an indispensable quality: life. 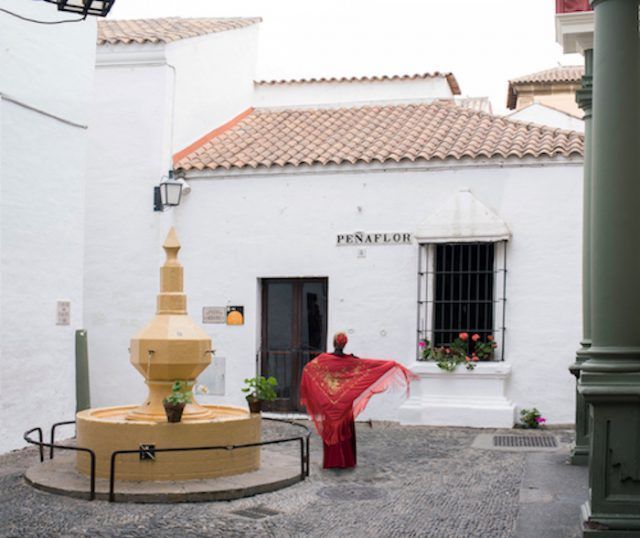 “El Patio del Farolillo” (The patio of the street light)

In those years, Barcelona bubbled with enough flamenco activity to make it the object of envy of cities across Andalusia. The advent of the World Fair intensified said? activity such that every day flamenco lovers would make their way to Montjuic, to the Poble Espanyol. They would congregate with particular enthusiasm at the Patio del Farolillo.
In his work, Vida Privada, Josep María de Sagarra wrote, “The dinners from el Ambassadeurs, of la Rosaleda, Miramar and the most economical ones from the Hostel del Sol and from la Pérgola, along with the wine and toasted almonds from the Patio del Farolillo expanded the country’s gastric inconsistency. Anyone with two coins to rub together, or without them, went to Montjuic.”
The Patio del Farolillo became a meeting point in the daily flamenco party. Catalan aristocrats, intellectuals, visual artists and well-known flamenco artists would frequent the spot, along with many other prominent figures of the time, dukes, marquesses, ambassadors from France, Italy, Germany: no-one wanted to miss out.

This one’s for you, Mr King!

For the Tablao de Carmen, the Patio del Farolillo is emblematic of a golden era of flamenco in our city. This small Cordoban patio, known today as the Patio de Carmen, or Carmen’s Patio, will always be remembered for one event. It was here that Carmen Amaya, a little girl at the time, surrounded by her family, danced for King Alfonso XIII. She danced to inaugurate the World Fair that would go on to change the mountain of Montjuic forever. An intense year of extraordinary flamenco performances and experiences began.
It is told that before she started to dance and after being instructed on the royal protocol to address the monarch, the young Carmen turned directly to Alfonso XIII and instead of referring to him as ‘your Majesty’ said to him, “This one’s for you, Mr King!”

Sources consulted for this article:

In the first image, El Patio del Farollillo in 1929; in the second, the same place today.

Special thanks to Charo from !Ole qué Arte! shop and to the dancer Conchi Carmona for having participated to the shooting.