“The two biggest achievements of the International Exhibition of 1929 were the Magic Fountain and the `Pueblo Español´ (the Spanish village). Before the start of its construction, nobody imagined that a simple fountain could be so enchanting. But to this day, the fountain maintains its capacity to stir the waters of one’s imagination. This speaks to the irrefutable fact that the fountain’s modernity has stood the test of time, a considerable challenge. Not only does it amaze the public, the Magic Fountain is the attraction to receive the most visitors after the Sagrada Familia. It’s a shame they cannot be counted.
No one imagined either that the Pueblo Español would be so well received. The key to its draw is tied to the mentality that inspired its construction. Among its authors were two architects (Folguera and Reventós) and another professional with the mentality of an architect (Utrillo). Thanks to this fact, not only were buildings erected, which is the easy part, but they also managed to create realistic, lively, cozy, and genuine streets and squares, which is no small task. It was for this reason that it was amnestied, although it was originally destined to be knocked down. Only then that the excellent idea of breathing life into the interior of the buildings was conceived.”

Following these words that our admired Luis Permanyer, well-known journalist turned unquestionable chronicler of Barcelona, has kindly written for the Tablao, our posts are dedicated to those spaces that the writer mentions with such fondness: the Magic Fountain and the Pueblo Español. These two spaces are tightly linked to the Tablao’s present, but, more importantly, to its past.

THE MAGIC FOUNTAIN OF BARCELONA

Every sunset, from Wednesdays to Sundays, only 200 metres from the Tablao, an extraordinary spectacle of light, colour, water and music leaves hundreds of passersby enraptured. It’s the Magic Fountain, a monument that is considered to be the most important aquatic Art Déco piece in the world.
It was almost a century ago that Barcelona invented a show that combines both aquatic and musical elements. It remains unrivaled not only in its historic characteristics, but above all in its aesthetic, its emotivity and in being an effective form of entertainment. Listening to “Barcelona” which Freddy Mercury and Montserrat Caballé transformed into the Olympic hymn of this city, while the water rises and falls at the speed of light, or turns into pink powder, or when it slows like lava; watching water dancing like artificial flames to the rhythm of these epic voices is of the most beautiful and moving things this city has to offer. 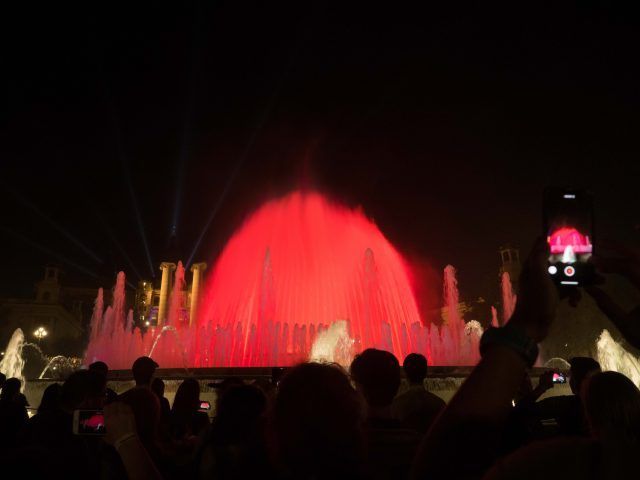 THE HISTORY OF THE MAGIC FOUNTAIN

The Magic Fountain owes its origin to the 1929 World’s Fair, which took place in Barcelona. To those who are unfamiliar with it, the World’s Fair was a large event that called on every country in the world to publicise the technical and artistic innovations of each country. In the days when there weren’t other means of broadcasting this information this event had great social and cultural impact. An affair capable of changing a city. Barcelona decided that the Montjuic mountain would be the site to host its second World Fair (the previous one had been in 1888). This represented a challenge in itself. Until then, the people of Barcelona did not care much for their mountain. They were not familiar with it, likely due to its military use or to the cemetery located on one of its sides. Or perhaps because we’ve always been somewhat lazy and we are averse to steep inclines. But in 1929, the people of Barcelona changed their perception of their mountain. It took a turn that would be rounded off with resounding success in 1992, with the advent of the Olympics.

The project that would give shape to the fountain took time. The remodelling of the area, of the surroundings, and of its access points continued: the Plaza España, the Avenida María Cristina (the exhibit’s main street), the Pueblo Español… The progress continued without the fountain. But there came a moment when those responsible for the construction desired something more impressive, festive and memorable. It was then that this idea arose.

THE ART OF WATERLIGHT

Within intellectual circles there exists a conflict over who authored the original project. Several prestigious architects attribute it to Forestier, the French architect, the recognised landscape architect and “soul” of all the gardening in Montjuic. But officially, the engineer Carles Buigas is listed as its only creator.
The philosopher and writer Eugeni d’Ors defined the work of this native of Barcelona, whom resided in Paris for many years, as the art of agualuz, or ‘waterlight.’ Buigas had already completed some pieces and was well-versed in using water as a conductor for light.
The design of the fountain is Art Deco, because this stunning artistic movement was at its peak after the recent discovery of Toutankhamon’s tomb.

BARCELONA WAS A CELEBRATION

Barcelona was living an era of grandeur and joy which the World Fair did nothing but propagate. The city bubbled with life, parties, with its famous musical cafés and its daily performances. And flamenco had much to do with this overbrimming euphoria. Just as Montse Madridejos tells in her prestigious thesis (“El flamenco en la Barcelona de la exposición internacional 1929-1930”. Edicions Bellaterra, 2012), Barcelona was so influenced by flamenco that it challenged Sevilla to the title of the flamenco capital of Spain.
Carmen Amaya danced for King Alfonso XIII the day of the inauguration of the World’s Fair and the Pueblo Español. It is very likely she danced, in the Tablao de Carmen’s Patio Cordobés, as the first jets of coloured water simultaneously flowed from the Magic Fountain. Only 200 metres separated the two events.

Entry to the Pueblo Español is free with a reservation to the Tablao de Carmen.

The Tablao de Carmen would like to thank “Agus” (Agustín Cabrera Valenzuel) and “Estrella” (Estrella Silva Molina) for their generous collaboration with the photographs in this article.