Flamenco is a live, musical, oral, gestural and social art.

When the word “flamenco” is used today, it evokes a dance, the playing of a flamenco guitar, the rhythm of clapping palms and the cry of flamenco voices.

Flamenco is a whole musical and expressive universe unequivocally associated with the territory of Southern Spain. There is no doubt about this place of origin.

What is the origin of flamenco?

There is a general consensus in the academy that flamenco originated in the lands of Lower Andalusia. There is also agreement about the moment of its inception. In the 18th century, the songs and dances that were performed in this region among the Andalusian people and gypsies began to be called “flamenco”.

The history of the Iberian Peninsula tells of the first arrival of the gypsy collective in France around the 15th century. But it was in the South of the peninsula where they mostly settled and coexisted with Arab and Jewish people. These groups shared traditions and cultures for many centuries, exchanging and mixing musical forms and customs.

It is important to highlight that the first public appearances of flamenco date back to the middle of the 19th century. Before that time, flamenco was developed in private circles, in social contexts of work or family ceremonies.

Flamenco was first and foremost singing and rhythm, solo. Its creators were those who alone and anonymously sang while working in the fields, threshing, tilling, walking; or the miner who sang coming and going from the mine; the blacksmith in the forge; the tavern goer who livened up the atmosphere or shared his feelings with those around him in the bar; or the women working or celebrating any family event.

Its origin is in the moment when a singer feels something and sings it out. The individualistic and rebellious personality of the Andalusian and the gypsy and their adverse social circumstances, in the face of injustice and despair, lead them to liberate themselves through singing, expressing their sorrows and joys.

Origin and evolution of flamenco

Flamenco summarizes the meeting of many cultures that coincided in Andalusia during many centuries of coexistence. The Jewish, Arab, gypsy and Andalusian communities influenced each other and little by little rhythms and ways of singing emerged. And the singing and its rhythm beckoned to dance. The guitar and other box and string instruments accompanied this evolution.

It is interesting to note the point of view of some flamenco scholars. In the prologue to Historia social del flamenco or Social History of Flamenco, by Alfredo Grimaldos, J. M Caballero Bonald explains that “from its uncertain origins to its most recent modes of manifestation, the artistic fortunes and adversities of flamenco have usually depended on the lived adventures of the performers, on their expressive needs, but above all on their degree of integration in a given society.” While the last point might seem obvious, it is key. When something is well-received, it grows. When it is rejected, it dies. Flamenco, human and expressive in nature, flows and lives according to the society that receives it.

A very brief explanation of the evolution of flamenco covers three distinct and different moments in the history of this artform.

In the first marginal phase of gypsy-Andalusian singing, everything is the result of the individual, personal and creative contribution of its performers. It comes out of a natural environment, where the flamencos conceive the world in their own way and transmit it in their own way. Solo vocals without guitar. According to Antonio Machado y Alvarez (Demófilo), the highest authority on the beginnings of flamenco song, the first records (not documentary but rather oral) of a flamenco performer are of Tío Luis el de la Juliana, a water carrier from Jerez. 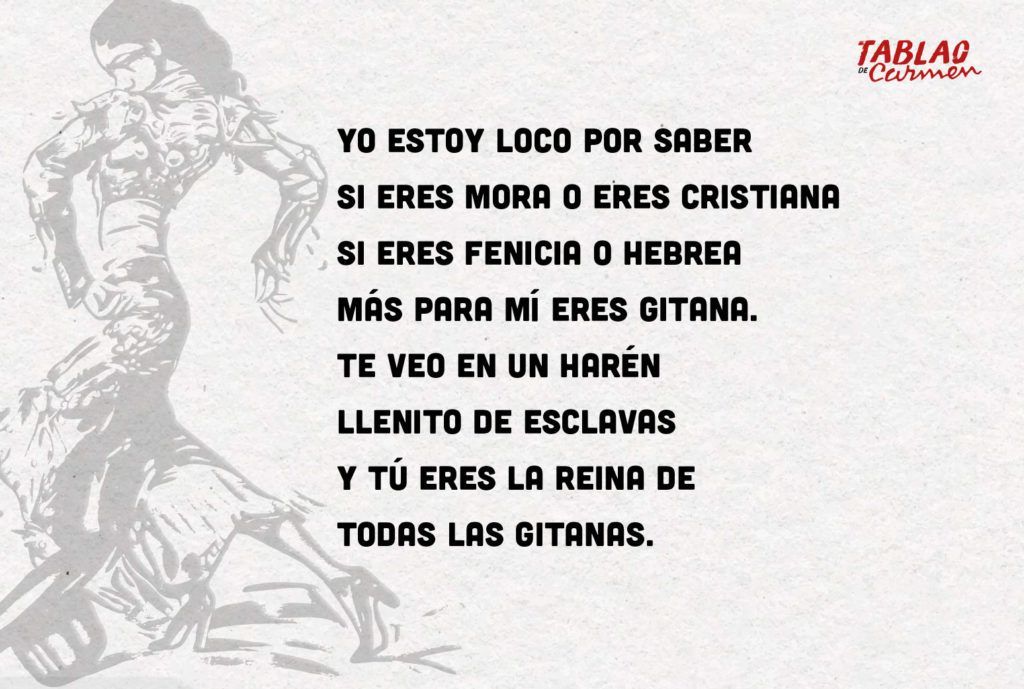 With the passage of time, these songs were taken to public stages, to taverns… to be listened to outside of their place of origin. Flamenco was professionalised and gypsy songs became “Andalusian,” moving away from their primary character and ingenuity. Flamenco became a mixed genre, a mix of very heterogeneous elements. . The purists of the time claim the loss of the flamenco character and essence.

But it is then that the “dignification” of flamenco singing is achieved. Regardless of the effects that may exist when professionalizing and reaching the universe of the public spectacle of the singing cafés and tablaos, the main actors of flamenco, its musicians, the guardians of the compás, are the curators of this art.

Where does flamenco originate?

As an art form, it could be said that flamenco is born every day that one sings it or plays it on an instrument or dances it.

The true place of origin of flamenco is the heart or soul of the performer (singer, musician or dancer) or wherever the feeling that is to come out comes from.

Flamenco remains a philosophy of life, and its continuity depends only on that of its creator. The flamenco artist has no boundaries because the art itself has no boundaries. Recognising flamenco as an attractive and special art is obvious and undeniable.

Today in 2022 flamenco enjoys worldwide expectations and admiration. It can be found all over the world.

From our space dedicated to this art, Tablao de Carmen en Barcelona, we maintain the firm mission of preserving and presenting the purest and most genuine flamenco possible.